Three Rivers came into the Bess Activity Center and at times dominated a team that was 14-3.

A convincing win is just what the doctor ordered for the Raiders, who had previously lost four straight games. They mixed balanced offense with one of their better defensive performances, and the Raiders earned an 87-77 win over Mineral Area to open Region XVI play.

"I think it was our best game we've played all year," Three Rivers coach Gene Bess said. "You know, we're kind of in a mode right now that we're still searching, and we rely on Tristan (Jarrett). He's doing a pretty good job sharing the ball and leading."

Jarrett continued his sensational season, scoring 35 points in 34 minutes. The nation's leader in scoring average scored 30 or more points for the seventh time this season.

Jarrett put momentum on the Raiders' side to end the first half, nailing a pull-up 3-pointer with around five seconds remaining to put the hosts ahead by nine at the half.

Three Rivers (7-9) fed off that momentum and got out to a 26-11 start in the second half as the 3s were falling. Abiodun Ayetimiyi started the long run with a trey after hustling for an offensive rebound and stepping back to the corner for the triple. 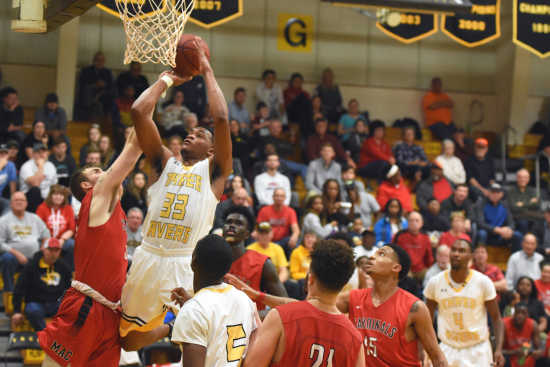 Jarrett then scored seven straight Raider points with a hanging layup, a step-back 3 and a finish through contact. Hayden Sprenkel, Fonda and Khalil Johnson knocked down consecutive 3s on the wings to put the Raiders up by 17 points.

Johnson's 3 sparked a 10-0 run that put Three Rivers ahead by a game-high 24 points before the Cardinals (14-4) began to show life again.

"Khalil has been shooting the ball well, and he had a good game tonight," Bess said.

Mineral Area's offense awoke and went on a 19-7 run to make things interesting again. Darreus Brown got the run started with a 3 on the wing. Brown followed up by dishing a pass to Steve Wooten for a layup off the glass. Wooten got inside for two more layups, scoring six straight as the Cardinals kept fighting.

A trey in the corner from Anthony Wales cut the Raider lead to 10, but with 3 minutes left on the clock, a bizarre sequence occurred.

Ayetimiyi dove for a loose ball and got fouled after a Mineral Area player dove on top of him, and that was a play that shifted the momentum back in favor of Three Rivers.

"What more can you say about (Ayetimiyi)," Bess said. "He got that loose ball there. So critical. Three guys jumped on him. If everybody played that hard every possession, we'd be really good." 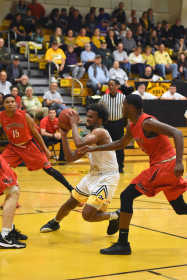 Three Rivers' Miganeh Jama, middle, drives to the rim during the first half of Saturday's game against Mineral Area at the Bess Activity Center.
DAILY AMERICAN REPUBLIC/Nate Fields

Two Mineral Area players were issued technical fouls after the call was made, giving the Raiders four free throw attempts. Ayetimiyi missed the front end of a one-and-one at the line, and a Cardinal was called for an intentional foul on a box-out attempt, which gave the Raiders two more shots and possession of the ball.

Johnson stepped up and knocked down a big 3-pointer to put the Raiders up by 17 points with under three minutes to go in the game.

The Raiders noticed differences in almost every facet of the game that allowed them to open region play with a statement win.

"Defensively, we were just clicking a lot better. The intensity right out of the gate, the ball movement was a lot better. We were unselfish," Johnson said. "Just the intensity from the jump, it started in the locker room, honestly, and it just carried over onto the court."

Added Fonda, "It was intense, really intense, and this is just going to push us harder for our next region game."

Johnson tallied a season-high 16 points on 6 of 11 shooting from the floor and four made 3s in 31 minutes. It was Johnson's first time scoring double figures in back-to-back games this season.

"I just started having fun with basketball again," Johnson said. I mean, just my confidence (changed), and I'm just playing like I would at the park like it's another game and taking it to another level."

Fonda posted 18 points, 10 rebounds and three blocks, notching his first double-double of the season in a solid all-around effort.

Three Rivers will travel to State Fair for another region game at 7:30 p.m. Friday.