POPLAR BLUFF – Despite it being a close game in the first half, the No. 1 Three Rivers women's basketball team were able to open it up in the second half in order to get the 75-54 win over Mineral Area on Wednesday. The Raiders snapped a three-game winning streak the Cardinals were riding going into the game.

"Mineral Area is a very well coached team," Three Rivers coach Alex Wiggs said. "They did stuff (Wednesday) that they didn't do the previous two times that we faced them."

Myia Yelder led the offense with 21 points while Kourtney Kendrick contributed 13 and Jenna McMillen made four 3-point buckets to record 12 points off the bench. Joi Montgomery was two points short of a double-double but was able to get 13 rebounds with 10 of them on the defensive end of the floor. 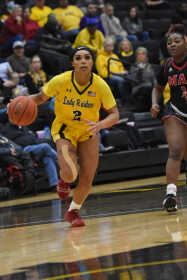 Myia Yelder drives to the basket on a fast break against Mineral Area during the first half on Wednesday, Feb. 16 at the Libla Family Sports Complex in Poplar Bluff, Mo.
DAR/Robert Augsdorfer

"Joi got into foul trouble going into halftime," Wiggs said. "I challenged her to get those boards in the second half and she was able to deliver." 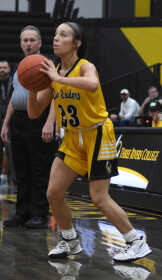 Jenna McMillen gets ready to shoot a 3-point shot during the first half against Mineral Area on Wednesday, Feb. 16 at the Libla Family Sports Complex in Poplar Bluff, Mo.
DAR/Robert Augsdorfer

The Raiders got their lead up to 25-15 in the first minute and a half of the second, but Mineral Area cut the lead down to one with a 15-6 run to make it 31-30 with just under two minutes remaining. Fortunately for Three Rivers, they were able to close out the first half with a 5-0 run to take a 36-30 lead into the locker room at halftime.

Three Rivers came out of the break in a dead sprint with an 16-2 run in the first five minutes of the third to take a 52-32 lead. Mineral Area started to chip away at the deficit, but Three Rivers still held onto a 63-47 lead going into the fourth quarter.

The Raiders will be back in action on Saturday as they'll travel to Jefferson College for a 2 p.m. matinee. 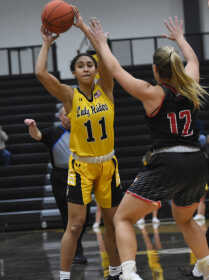