PARK HILLS – The No. 1 Three Rivers women's basketball team kept up the winning ways on Saturday as they handed Mineral Area a 77-54 loss on their home court. The Lady Raiders have now won 51 straight regular season games.

"The girls came out of the gate ready to go," Three Rivers coach Alex Wiggs said. "This is our fourth game in seven days and I know the fatigue is there and they're a little banged up. But I couldn't be prouder of how they started and how they held onto the lead." 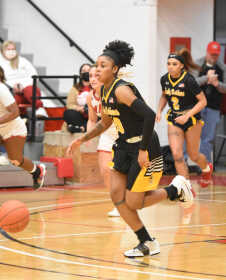 Joi Montgomery dribbles on a fast break during the second half against Mineral Area on Saturday, Jan. 29 at Park Hills, Mo.
DAR/Robert Augsdorfer

"Joi has been getting her confidence up the past few games," Wiggs said. "She's been able to make those tough shots." 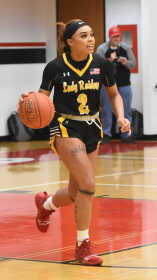 Myia Yelder goes up the floor during the first half against Mineral Area on Saturday, Jan. 29 at Park Hills, Mo.
DAR/Robert Augsdorfer

The Raiders maintained their lead in the third as they held onto a 60-33 lead with 4:20 on the clock in the third and went into the fourth with a 60-33 advantage.

Three Rivers will be back in action Monday as they'll take a trip out to Moberly Area for a makeup contest against the Greyhounds.

"Moberly is another one of those teams that's well coached," Wiggs said. "I know they've worked on their rebound control so we need to be able to rebound the ball and breaking down those defensive matchups." 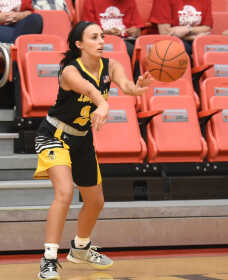 Karlee Holland passes it off to a teammate during the first half against Mineral Area on Saturday, Jan. 29 at Park Hills, Mo.
DAR/Robert Augsdorfer

Tip off at Moberly on Monday is scheduled for 6 p.m.