POPLAR BLUFF – It had nearly been a month since the No. 2 Three Rivers women's basketball team had played a game, but they did not miss a step on Saturday as they handled State Fair with a 90-43 win.

The Lady Raiders were led by a 26-point performance from Myia Yelder while Jenna McMillen and Mariah Smith contributed 12 and 11 points from the bench and Ari Winston had 10 points. Autumn Dodd led the team in rebounds with 10 along with four points on her stat line.

"We've got a group of leaders and everybody steps up when they should," Three Rivers coach Alex Wiggs said. "Joi Montgomery didn't have the points she usually contributes but she got in there and rebounded for us. That's what winning teams do and if the shots aren't falling for someone, they find different ways to be successful." 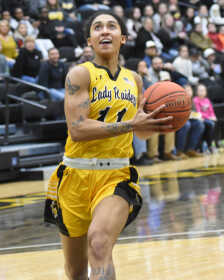 Autumn Dodd goes for a layup on a fast break during the first half against State Fair on Saturday, Jan. 22 in Poplar Bluff, Mo.
DAR/Robert Augsdorfer

Both teams were split in rebounds with 50 for each squad, but Wiggs saw an improvement in that area since the last time they played State Fair back on Dec. 4.

"That's what we struggled with the last time we played them," Wiggs said. "State Fair really outplayed us on the boards in that game. We are preparing everyday for the next game. So it shows the maturity and the desire to be successful. Since we haven't played in 26 days, we tried to keep the practices fresh so they wouldn't get bored and try to keep them engaged and it goes to show how great of a group we have this year." 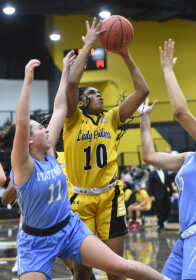 Joi Montgomery tries to get a shot away against State Fair's Grace Goodwin during the first half on Saturday, Jan. 22 in Poplar Bluff, Mo.
DAR/Robert Augsdorfer

Both teams struggled offensively in the second as Three Rivers led 30-16 with less than five minutes until halftime and the Raiders took a 43-22 advantage into the locker room at the break.

Shortly after the game was over, the Raiders learned that No. 1 Northwest Florida had lost to 52-50, giving Three Rivers a possibility of seeing themselves in the top spot when the national rankings come out next week. 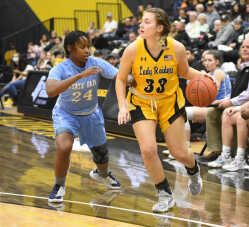 "We could possibly be the top team in the country," Wiggs said. "We strive to be number one in the nation. I know the girls will hear it from their parents and people in the community that they're a great team and that's true, but we need to be able to bring it every single day and be prepared for every game. We have that target on our backs from last year and moving up in the rankings, that target gets a little bigger."

Three Rivers will be back in action on Monday as they'll host St. Louis at 6 p.m. at the Libla Family Sports Complex.